William and Jonny Serbus became the 2nd and 3rd Boy Scouts in Kimball Troop 357 history to
receive the Ad Altare Dei Religious Emblem.
The boys started working on this program back in March, when the Covid-19 pandemic
cancelled religion classes at St. Anne’s Church. Wanting to keep a religion program
throughout the school year, the boys decided to partake in this program, working on it every
Sunday in lieu of religion class. The purpose of the Ad Altare Dei ( to the altar of God) program is to help Catholic Youth of the Roman Rite develop a fully Christian way of life in the faith community. The program is organized in chapters based on the seven sacraments. The seven Sacraments are a primary means toward spiritual growth. The most important aspect of the program is that the Scout grows in his spiritual experience of his relationship to God and the church.

William and Jonny completed and passed their board of review on Sept. 8, 2020. Since William
and Jonny earned this Religious Emblem they are also entitled to wear a Boy Scouts of America
Religious Knot over their left pocket. The Ad Altare Dei was presented to the boys on Sunday,
Oct. 4, 2020 with a Mass with Bishop Kettler at St. Augustine Church in St. Cloud. Bishop
Kettler was thrilled to do this special Mass for the Scouts as he was an Eagle Scout 63 years
ago. Four scouts in total earned this emblem, William, Jonny and only two others from the
diocese.

This is the 2nd religious emblem the boys had earned, as they had previously earned their
Parvuli Dei (Children of God) emblem as Cub Scouts.
William and Jonny are active members and altar boys of St. Anne’s Catholic Church.
They are the children of Matt and Carly Serbus. 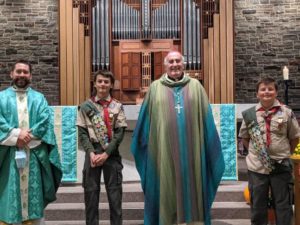 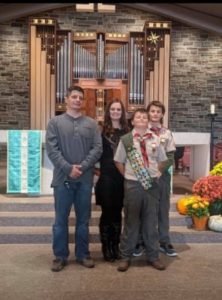